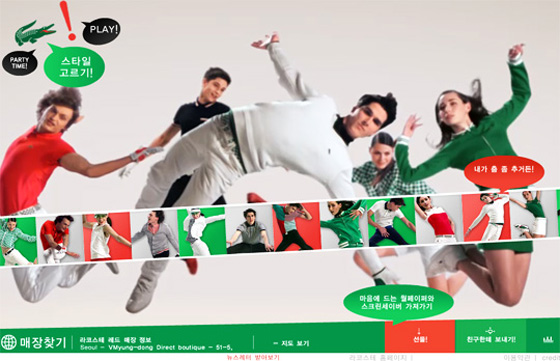 As our first post on this blog, it is our great pleasure to announce that after weeks of hard work, we have finally launched the online campaign for the Lacoste Red! collection in Korea, Japan, and China.

Originally designed for Lacoste by Megalo(s), the package welcomes web users to the “Red Party”, a virtual universe where music, dance,  fashion, and video game come together to celebrate the Lacoste Red! spirit.

The website opens with surreal choreography created by Kris Moyes. Visual experimentation – involving ultra-slow movements, 3D tracking and morphing from one style into another – provides a striking first view of the collection!
“Extraball”, the single by the new heart-throb of French Electro music, Yuksek, has been selected as the soundtrack for this virtual party. Web users are invited to take part in the celebrations by choosing their favorite style among 15 available, and are then led into a game, going deeper into the Lacoste Red! universe.

We have also localized the online campaign, which will support these micro-sites and target young people aged 15-25.

See you at the Red Party!