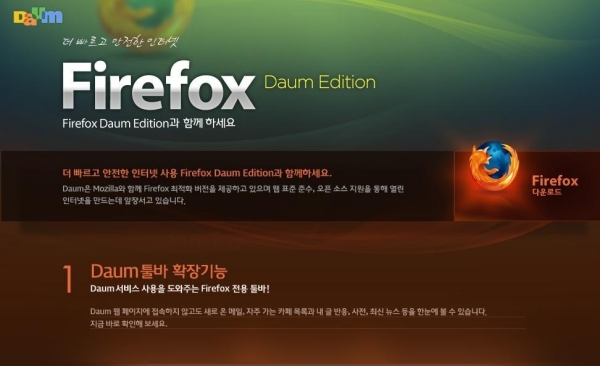 Daum continues to give a positive impression to Korean Internet professionals by promoting a Daum edition of Firefox 3 in partnership with the Mozilla foundation.

Korea is often considered as the home of the best Internet in the world, but one fact still keeps the Korean Internet in the past: about 99% of Koreans use Internet Explorer on Microsoft Windows.

An early government initiative required a proprietary ActiveX encryption for every secure transaction, resulting in practice in banning all alternative solutions and pushing local web agencies to build non-standard and IE-centric websites. Consequence: the Korean Web is hard to export, invisible to major search engines (Google, Yahoo!, etc…) and almost inaccessible for foreigners (who often use alternative browsers ).

Remedying to this situation became a recent government priority and Daum is certainly one of the most proactive companies in this domain: it was the first major Korean portal to be fully W3C compliant and to implement strict cross-browser compatibility and accessibility standards.