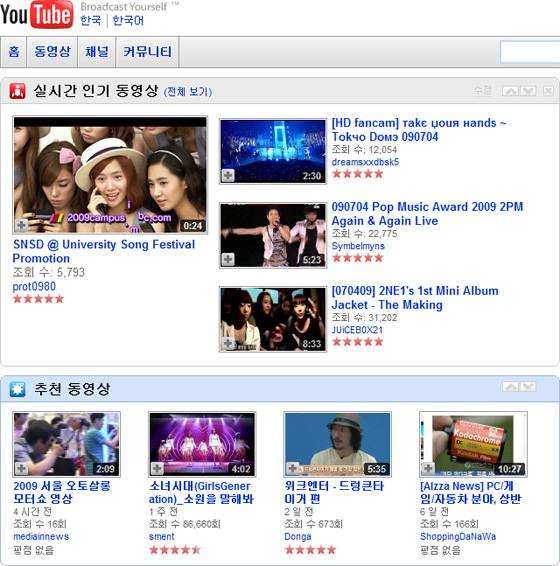 According to KoreanClick and the Korean Times, for the first time since its launch in Korea in 2008, last month YouTube became the number one video portal in overall usage time with a 42.79% market share.

Although local player Pandora.tv lost its first position in June with 34.19% market share, it still maintained its top position in terms of unique visitors at 6.9 million versus 4.7 million for YouTube.

This might come as a surprise to many, as YouTube was highly criticized last April when it refused to implement the real-name system required by the Korean government.  Instead of asking its users to provide their real names and identification number to upload videos, YouTube decided in a controversial move to disable the functionality on its Korean site.  It was then highly anticipated that users would eventually leave YouTube in favor of local competitors like Pandora.tv, but as this study shows, it clearly was not the case.

In addition to the effort Google (who owns YouTube) is constantly making to try to better listen to its Korean users and adapt itself to the Korean market, the reason why YouTube has an increasing market share in Korea might just be because of its ease-of-use and focus on usability (quick registration process, no ActiveX or special player required to play videos), the recent possibility to embed videos on Cyworld (the first social network in Korea), and the amount and diversity of content made available by its worldwide user base.  It’s clearly an excellent recipe to build a very strong position in the Korean market.