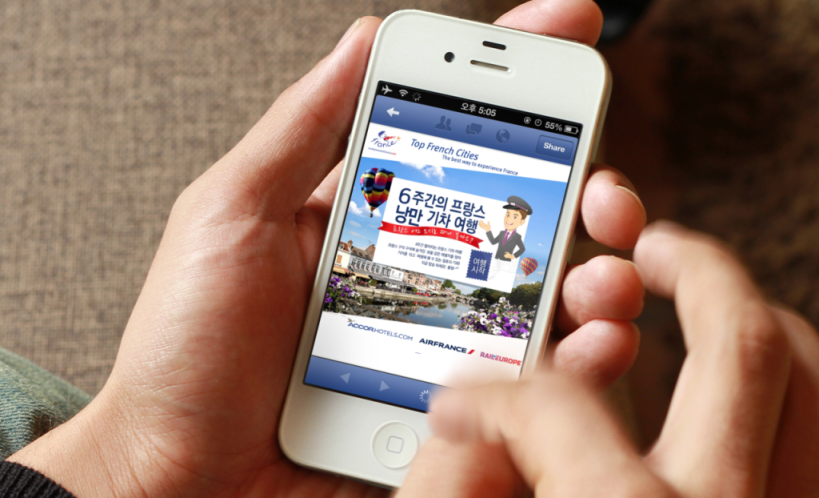 When the word “France” appears to Koreans, what comes up in their minds? Asking it to people around, no one would be surprised if most of them answer “Tour Eiffel” or “Paris”.

To change this, Asiance, together with Atout France – The France Tourism Development Agency – decided to show Korea that there are far away much more places to go and things to see in France rather than Paris.  But how can we tell them that there are lots of other beautiful, interesting cities in France without boring people to tears?

Facebook has become one of the main online social network services in Korea in the past couple of years and has outnumbered Cyworld in terms of active users. Atout France approached Asiance about their new campaign, it came naturally to the team that Facebook was the best platform to use –a campaign that would work with both PC and Facebook mobile users.
To make it easier for Koreans to travel around France, Top French Cities highlights 9 carefully selected itineraries for travelers. From Lille to Nice through Lyon, these 9 itineraries ensure that Korean tourists don’t miss a single thing about French cities. Every day, the train conductor would announce the next station on our trip with a bit of hint about what you must know about this place. 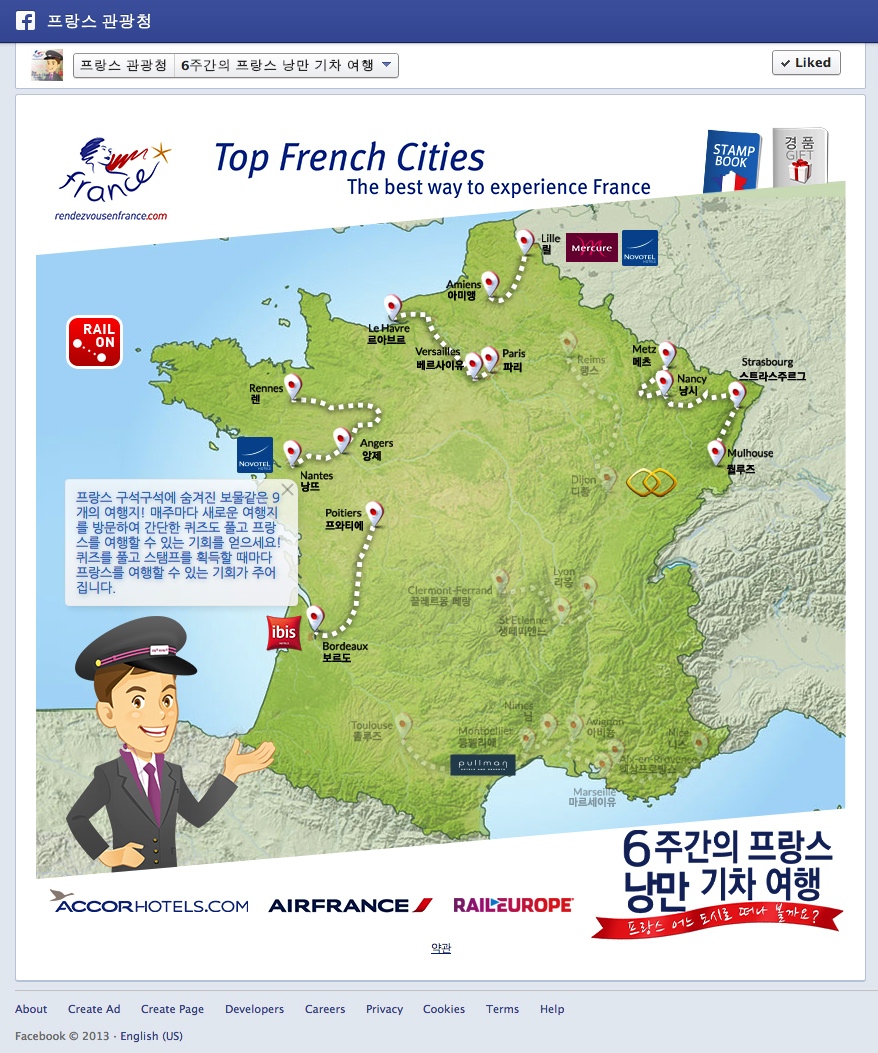 Each itinerary is composed of 10 questions with curiosities and facts about the destinations, and a new itinerary is given every 3-4 days. 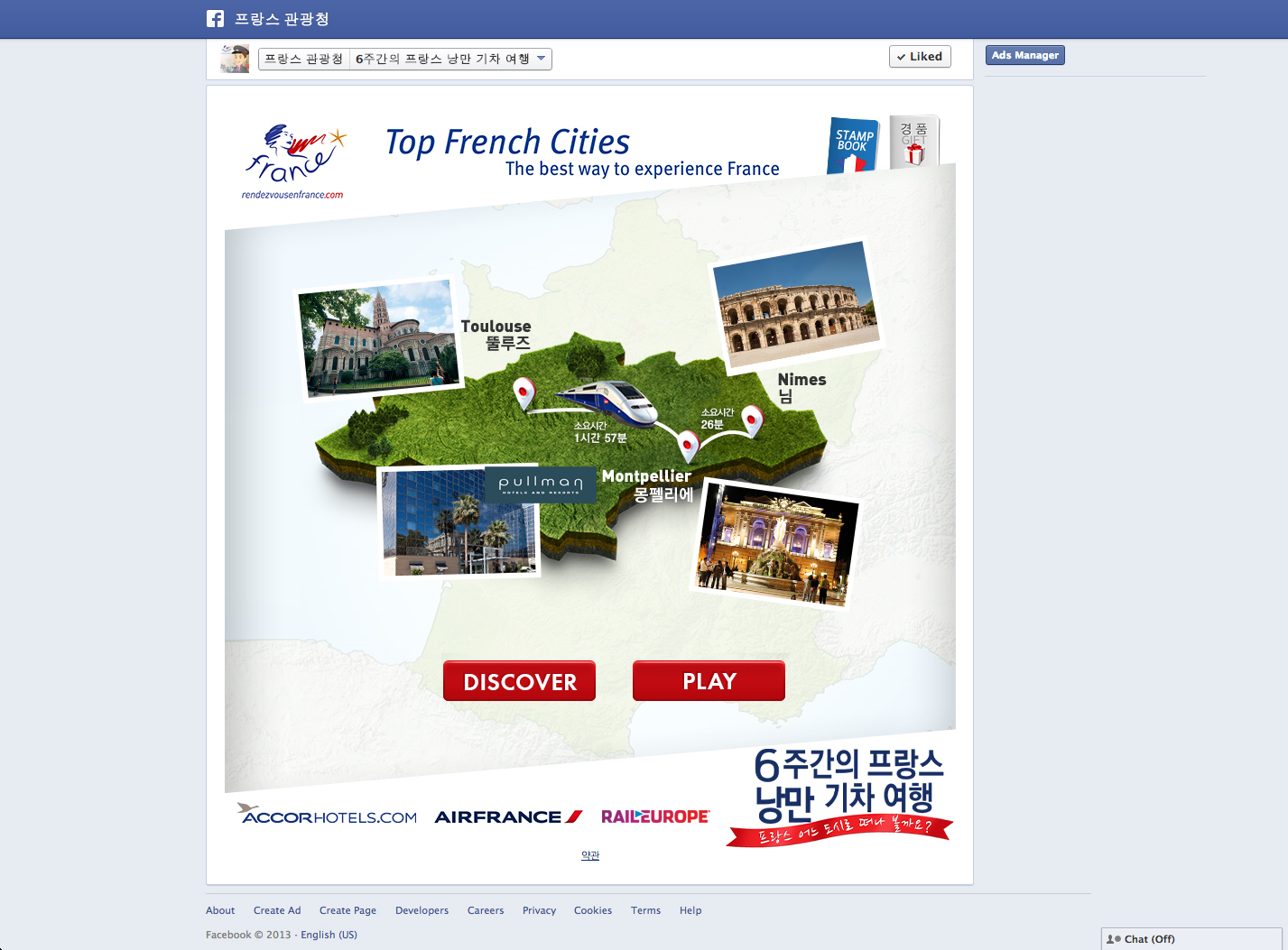 Those ones who got at least 5 right answers would receive a stamp, allowing them to win prizes such as tablets and even a trip to France!  The questions were not easy and it was amazing the number of people who got them right! 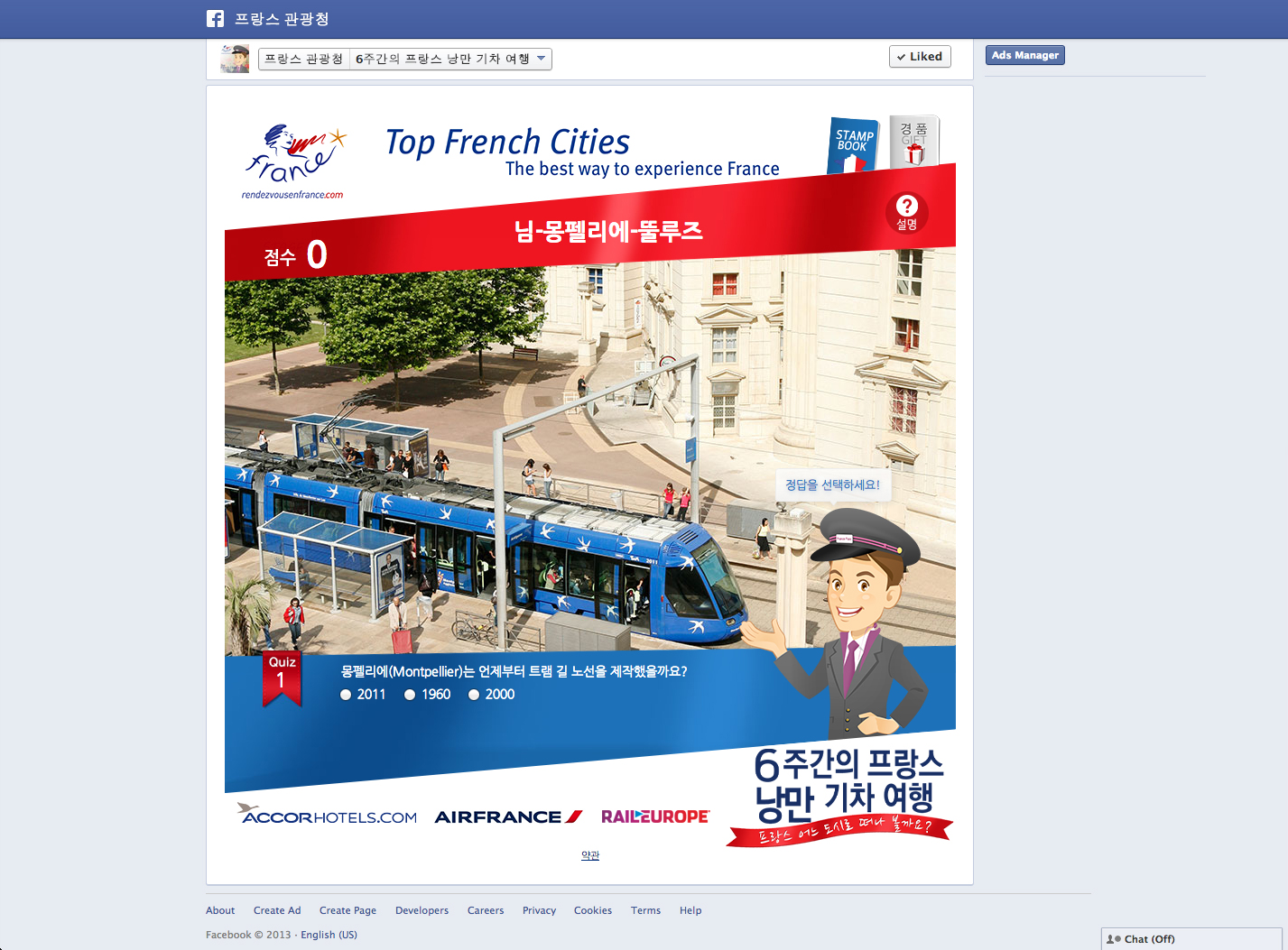 Fans could also discover a new city and get travel tips from posts from our special ambassadors: famous French expatriates in Korea; those posts contained well-detailed texts followed by many pretty and colorful pictures.

And to engage fans, even more, a photo contest was held, where fans were asked to upload the best photo shots from their travel to France or from somewhere that looks like France in Korea on the Atout France timeline. To thank them, small mobile coupons were given away every week. During those six “fan-tastic photo Fridays”, we had more than 300 participants and hundreds of photos posted!

The result? The game was a success, with more than 5,300 players (where 62% of them completed all 9 itineraries), with almost 200,000 page views. The most impressive was, still, the increasing number of fans: When the campaign started, Atout France Facebook page had no more than 2,200 fans. In 6 weeks, this number rose to 23,130!

Asiance’s team would like to thank Atout France for allowing us to work with them and to promote French tourism in Korea. Last but not least,  warm congratulations to the big winner! We wish you a “bon voyage”!