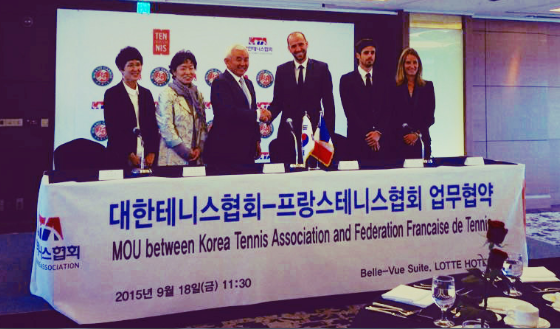 Our partner, the FFT (Fédération Française de Tennis) held a press conference with the KTA (Korea Tennis Association) to announce an upcoming collaboration as well as exciting events to be held in Seoul on the occasion of the 2016 edition of Roland Garros tournament.

Before the tournament, you can have a Rendez-Vous à Roland Garros! A junior tournament played on clay courts to recreate Roland Garros’ atmosphere will give a chance to the winner to play the finale games against each countries’ winners in Paris in a playoff.

When the tournament will be played in Paris, a second event, Roland Garros in the city, will be organized. Although this event already took place in Beijing, Shanghai and Rio de Janeiro among others, it will be the first time in Seoul!

To increase awareness around Roland Garros in Korea and create a conversation around this announcement, Asiance conducted an online viral marketing campaign. We invited some Korean bloggers to the conference and used online communities and Facebook pages to create content. As a result, we had more than 180.000 impressions, and the search queries for “Roland Garros” consequently improved!

Asiance will also be responsible for the digital strategy of Roland Garros offline events in Korea and can’t wait to work on this thrilling project!