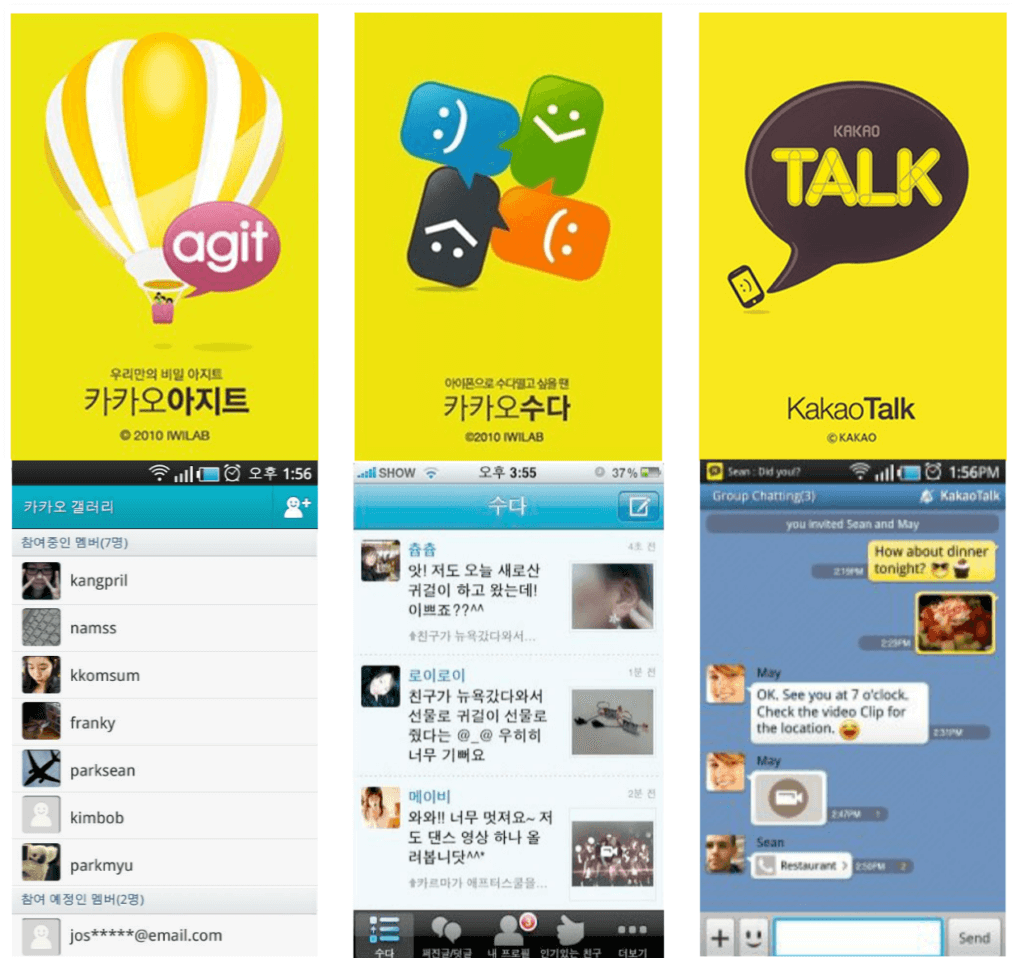 In just 10 years, how did Kakao Talk become the cultural icon it is today in South Korea?

[This is part 2 in the series of our introduction of Kakao Talk, Korea’s most popular messaging application.]

Kakao Talk did not just become a messenger application giant overnight. It had a clear strategic approach every step of the way, from its launch to each exclusive function. In this part of the series, the strategies of its alluring influence in the Korean mobile market will be revealed.

Kakao Talk initially had 3 versions of the messaging application when it first launched for iOS: “Kakao Agit” similar to an online community board, “Kakao Talk,” a messenger app that resembled default messaging applications, “Kakao Suda,” a Twitter look-alike microblog, where users upload videos and images.

In 2010, Kakao Talk and Kakao Suda placed 1st and 2nd in the Korean app store market social network category. Eventually, when they discovered that the group chat feature of Kakao Talk was gaining the most engagement, the company started focusing on the app, merging other services into one.

How did Kakao Talk attract users in its initial phase? Well, let’s first take a look at their launching strategy.

People lining up to get the 1st iPhone in Korea (Image Source: Etnews)

The legendary KakaoTalk would not have made been a hit without the iPhone. Beom-Su Kim launched KakaoTalk just as Apple released its first iPhone product in Korea in November 2009. I.W.I. The lab had plans for other mobile services, however, as the company heard about the launch of Apple’s new product, they started focusing on iPhone friendly mobile communication applications. Their strategy was flawless, as with its launch, mobile phone usage started pivoting in favor of smartphones. In Korea, many change their phone once every two years and are more open to upgrading their devices. According to ATLAS, an IT/Broadcasting Research & Consulting firm, apple sold 43,200 i-phones within its first week of launching in Korea.

As the smartphone was a whole new device from its predecessors, people were open to trying out the new functions and programs of the device. However, as the concept of mobile applications (app from below) was very new to many users, the app needed a user interface familiar to the ones people used to access on PC and older mobile phones to attract more users.  I.W.I. looked right through this consumer need. As a result, the company combined both the default messaging application from mobile phones and online messengers from  PCs.

This strategy worked very well for two main reasons: first, when the smartphone first entered the mobile market, it positioned itself as shrinking a PC into a mobile device. So offering a service that was popularly used on the PC helped people become more easily accustomed to the app. Second, mobile phones were primarily used for communication at that period, and users were limited to only a certain number of texts per month, leading to a lot of frustration and expensive phone bills. Offering a free alternative certainly solved this issue. Unlimited instant messaging through a PC-like application simply was a godsend.

The graph above represents the immediate drop in messages sent through traditional text platforms after the surge of Kakao Talk in 2010, signing a dramatic shift to 3rd party messaging apps after an increased tick in mobile phone use.

The last strategy they used was direct communication with end-users. When Kakao Talk initially launched, the company was new to smartphone UI, and so were mobile phone users. However, Kakao Talk quickly found a way to reach a breakthrough. What did the company do?

Kakao Talk asked users directly to report any bug or issue they experienced, as well as new functions they wanted to add on the app. In other words, the company made its users into value co-creators. In return to their contribution, Kakao Talk thoroughly explained each update, one by one. (They still do.) The explanations cover even minor updates, such as creating group calendar events and have people vote on the dates with a visualization explaining how to use it. Through thorough explanations, users are also able to learn about new changes to the mobile device environment and more actively contribute to the app’s development.

Network by Gilbert Bages from the Noun Project

There was also another reason that wasn’t part of I.W.I. Lab’s strategy but did help Kakao Talk to gain high popularity.

It’s worth noting that there were also no strong competitors to KakaoTalk in the market during the market shift toward smartphones. However, the app’s own unique characteristics as a communication tool helped spur the popularity of the app.

To make the best use of the Kakao Talk, users’ friends also needed to use the app. And it’s free – meaning that there were no constraints for people downloading the application,  allowing people to actively invite their friends. This had lead to the success of the app, garnering 10 million users within just one year.

Kakao Talk has since remained a very important part of life in the southern half of the Korean peninsula.