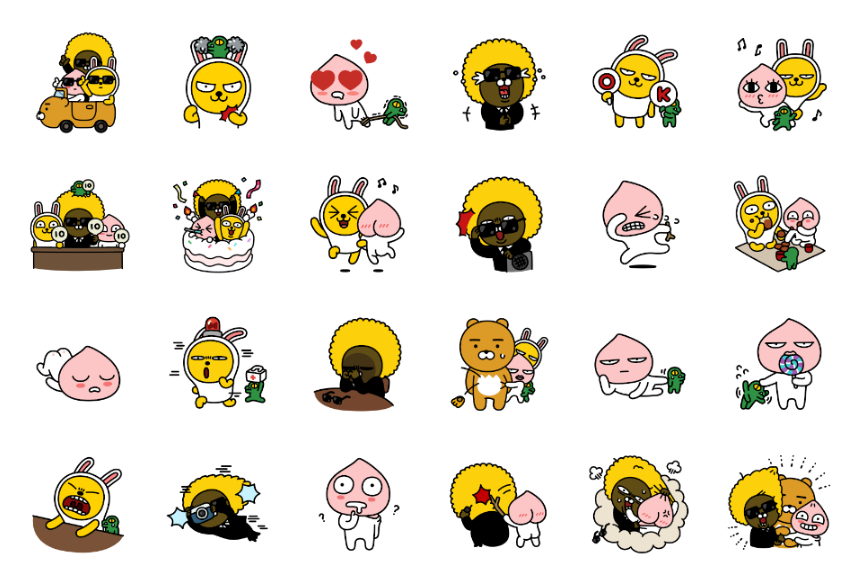 [This is the third and final part of the series introducing Kakao Talk, Korea’s most popular messaging application.] This Korean mobile messenger app giant would not have made it here without the constant updates on its features – sometimes with a nod of approval from users and sometimes without any notice. Kakao Talk differentiated itself from other mobile messenger apps by offering entertaining communication features to its users. Check out some basic functions Kakao Talk introduced on its app.

DOES KAKAO TALK WORK ON THIS DEVICE?

This was an almost mandatory question Koreans asked mobile phone sales reps years ago, at the time smartphones had just begun to enter mainstream markets. Samsung even developed a version of Kakao Talk that was compatible with Bada, a mobile phone OS developed by the company in  2011. How did this app become so popular? The high demand for the application was not without reason as Kakao Talk introduced many features for users that were not expected to be implemented into an instant messenger at that time.

To start, take a look at a brief introduction video of basic features in Kakao Talk. You can use the app for things beyond just chatting – from organizing events and calendars to polls, Kakao Talk has grown much since its initial product.

I. SPECIAL FEATURES ON KAKAO TALK

Here are several interesting features that Kakao Talk offers. Some of them are also available on the PC version. 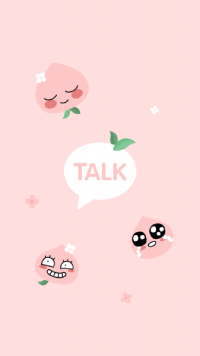 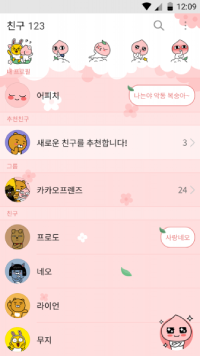 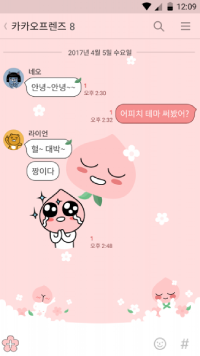 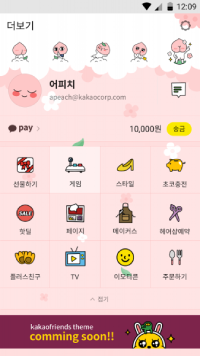 Kakao Talk opened the API for their skin so that users can create their own version of skins, known by users as ‘themes’. They can change the basic, default theme and download free themes made by Kakao, or those created by fellow Kakao Talk enthusiasts. Before Kakao Talk launched, users were unable to change themes or customize their older mobile messaging applications. However, Kakao Talk was the first to make it happen in Korea. Now people can change their themes to their heart’s’ content, whether it depends on their mood or the celebrity they are following at the moment. Above are some interesting examples of Kakao Talk themes using the brand’s own character; Apeach from Kakao Friends. 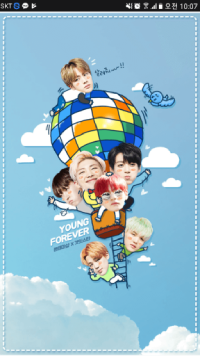 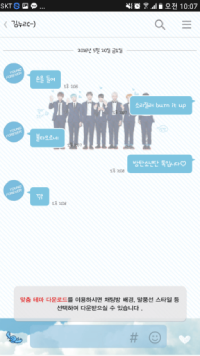 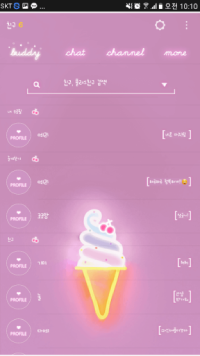 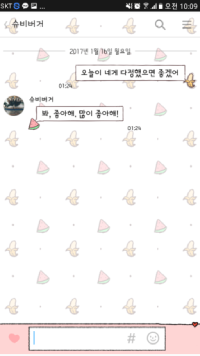 Kakao had originally offered themes at its theme shop, just as other messenger apps do. However, in Korea, hardly anyone had bought skins from the in-app store as they used 3rd-party apps created by users wanting to share their own themes to others like the ones shown above. Kakao Talk has made public the open-source for the themes, so talented designers have been devoting their creativity into creating themes of their own.

The results are overwhelming as themes of all kinds – those borrowed from popular animations to their favorite celebrities now have their own user-created theme. Some even create fan art versions and share them within fandom groups. As a result, Kakao Talk no longer operates its own theme shop. These customized skins were in higher demand than the paid versions on Kakao Talk’s theme shop. This creation process is one of the parts where users contributed as ‘value co-creators’ for Kakao Talk, and what led to increasing awareness and Kakao Talk surge in popularity.

B. Messaging: More than Just Text

It is easy to send texts through default texting apps on your phone, but it may have at times been difficult to express your true thoughts only with words. People resorted to creating faces using symbols, such as ^^ (Smile), +_+ (Stare), -_- (Seriously). >_< (Excited), etc. in Korea. They are known as emoticons in their simplest form, to kaomoji in their most complicated forms. Kaomojis are essentially ‘Japanese emoticons’ – those that use characters from different languages to express more complicated emoticons: from (´Д｀*), too (ΦωΦ)ﾉ, too (๑⊙ﾛ⊙๑), to ლ(ಥ益ಥლ). However, Kakao Talk freed people from simple yet dull faces made from text thanks to their special emojis and the messages they convey.

Every month, 20 billion emojis are sent through Kakao Talk

Let’s check out how the text style changed before and after the introduction of KakaoTalk. Emojis (絵文字), meaning ‘picture letters’ in Japanese, took the front seat in catalyzing this change, as they already allowed people to communicate more simply and funnily. In fact, many Koreans had been crazy about emojis long before Kakaotalk. They even made a Korean version of the name: emotion + icon = emoticon – creating their own take on the word ‘emoticon’. Due to their great love for this little tiny image, emoticons became one of the main sources of income for KakaoTalk.

Kakao Talk has hundreds, if not thousands of different emoticon sets. However, the most popular one is the brand’s own emoji alongside their own cute characters, known as Kakao Friends emoticons. Among them, animated emoticons and those with sounds were most popular as they convey more meaning than their lifeless counterparts. 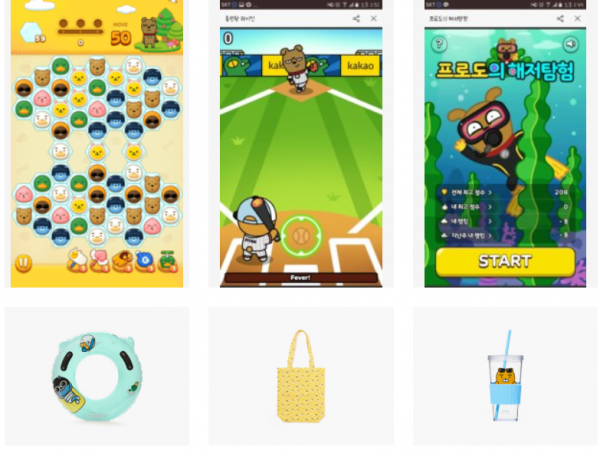 These adorable animated characters created by Kakao Talk are more than just an image for expressing moods in their chat function. They have developed a cult following from avid Kakao Talk users. Each Kakao Friend even has a human-like personality, to the extent that each character in the group has its own story. The characters are on mobile games made by Kakao, pens, phone cases, cups and every other merchandise imaginable. Kakao earned over 70 billion won last year through its character business alone. More than 1 million people downloaded Kakao Friends Popcorn – not the buttery treat but rather a mobile game where which users play simple character matching game. When Kakao opened its first offline shop at Gangnam, people waited hours in line just to enter the shop and browse all the Kakao Friends merchandise. More than 450,000 people visited the store within its first month.

As mentioned in the last part of the series, Kakao Talk’s strength lies in their group chat feature. If Kakao Talk decided to stick to its original features, just like its predecessors, it would have died off a long time ago. Instead, Kakao Talk has continued to develop various features for the profit even after their great success. First off, they developed different types of group chats such as open chat and secret chat. They also started to offer some features to business owners for promotion purposes. Furthermore, they allowed users to talk with their friends’ voice to voice and face to face by introducing ‘Voice Talk’ and ‘Face Talk’.

The Open Chat feature is similar to Kakao Agit that was explained in the last part of this series. People can search for an open group chat created under a specific topic and join the discussion with other users, either hiding or revealing their real names. For example, many individual investors make a KakaoTalk Open Chat room and discuss investments into a certain stock together or share stock related information. Chat rooms for celebrity fandom are also very common. Kakao Talk’s chat features reflect the country’s digital history and culture.

Kakao Talk also offers a secured chatting environment. Several years ago, an incident in Korea during 2014 occurred, where KakaoTalk allowed the Korean government access to users’ chat histories. Kakao Talk users had felt Kakao crossed the line by removing the privacy of their messages, causing them to begin boycotting the application. As a result, the Korean government drafted a new law regarding mobile messenger apps.

However – the new litigation had not strictly forbidden themselves from having access to a user’s chat history, but rather authorizing police or government bodies to review an individual’s personal messages with a warrant. This incident caused Kakao Talk, the biggest messenger platform in Korea, to lose a significant amount of credibility. In the aftermath, Kakao included a secret chat feature, in which people can freely talk to each other without leaving a trace on Kakao Talk servers, keeping their messages only accessible among the members in the chat room. 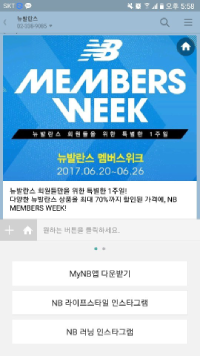 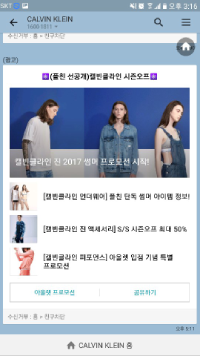 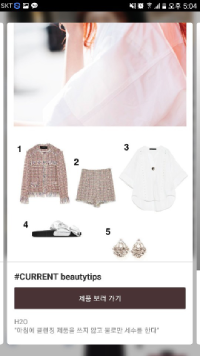 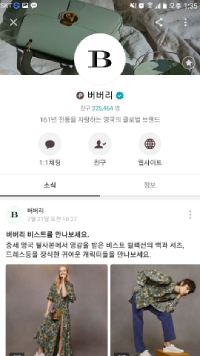 Kakao Talk also offers a special feature for businesses – Kakao Plus Friends. Acting as a direct means of communication to users, the feature allows businesses to send ad-messages or coupons to its friends (i.e. users that add the business’s Plus Friends account). Businesses can also create their own pages similar to those on Facebook, and upload images and links within the posts. Several examples are shown above. 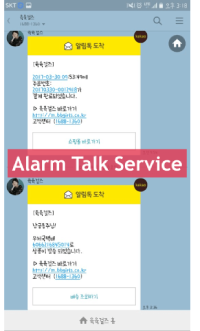 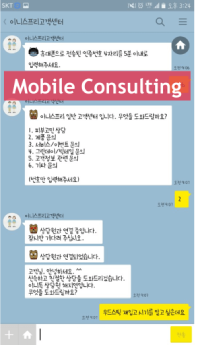 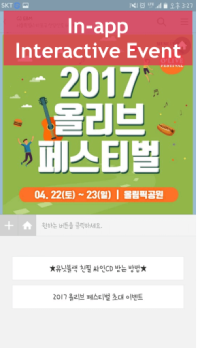 Furthermore, Businesses can utilize Kakao Plus Friends as a mobile customer center or mobile event platform. Before the introduction of Kakao Plus, businesses would simply use their individual KakaoTalk accounts – but now it is commonplace for Korean online shopping malls to utilize the ‘Alarm Talk Service’ and ‘1:1 Mobile Consulting’ features on Kakao Talk. Some brands went a step further and began using the platform to capitalize on digital marketing by offering some interactive Kakao Talk in-app events or coupons.

Kakao Talk also offers unique call features to users, some that users cannot experience on default call apps, allowing users to experience a more playful chat experience. One of them is a voice filter option on its ‘Voice Talk’ feature. For entertainment, users can change their tone into popular talking animals with Tom and Ben which adjust the voice to sound either high or low, respectively. In addition to the voice call, Kakao Talk provides ‘Face Talk’, its rendition of a video chat with its own features – allowing users to apply color filters.

Many of Kakao Talk’s features today are not very different from other messaging apps like WeChat or Line. However, the app is not only the very first messaging app people had access to in Korea, but it also remains it’s most popular. Many of the innovative features introduced by Kakao Talk were once benchmarked by WeChat and Line, with Kakao Talk only hindering now due to obvious demographic proportions (as there are over 700 million WeChat users in China.) Everything Kakao Talk offered in its early stage was refreshing and entertaining, constantly drawing users to the app and making it the most popular mobile messenger app in Korea.

In the end, Kakao had also eventually acquired Daum, the second-largest web portal giant in Korea, and is now expanding its territory to broaden the features it offers. Simple pay, gift shops, taxi-hailing apps, grocery shopping are examples of Kakao’s ever-extending reach on to mobile phone users. As Kakao Talk continues to build on its features and content, its relevance in people’s lives continues to grow. It is yet to be seen whether Kakao Talk can make as large an impact on the world as Line or WeChat – or whether those applications will tarnish Kakao’s dominance in South Korea. Either way, it’s clear that Kakao Talk is here to stay – and will continue to innovate and leave its own impact in the messenger world.