How Korea is using ICT to fight the pandemic

On April 28th, our CEO Olivier Mouroux presented during an exceptional webinar, organized by the French Korean Chamber of Commerce and Industry on Korea’s “Smart Management System” implemented to fight against the COVID19 while ensuring the privacy of the citizens within the framework of democracy.

In this article, several topics concerning the management of data by the government will be explained, especially the tracking system that was put in place. A comprehensive presentation of the application which makes it possible to track people during their quarantine with the details of the operation of this platform, the type of data that is shared today in Korea, and the central platform named Smart. 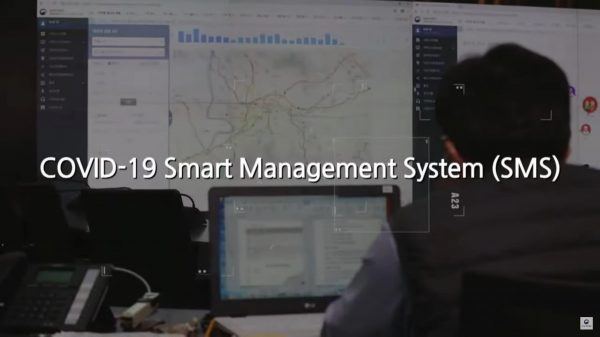 All information from various sources is available to KCDC staff in what is called a war room, this crisis unit allows them to monitor all the data on screens in a single room.

The first point to remember: the establishment of such a platform in record time (less than a month between the decision and the effective launch March the 26th) was possible because the MOLIT had already developed this type of applications for its smart cities as part of a national r & d project and this big data project and was therefore already in place.

The second point to remember: the objective of this platform was to aggregate data from 26 agencies including the police, telecommunication companies, and banks to facilitate access to all the data to trace a person’s journey and contact quickly potentially infected people.

The third point to remember: we went from a manual mode that required about 24 hours of work to collect the information to an automated system which today makes it possible to recover all the data about a contaminated person in just 10 minutes.

In conclusion, it is very important to understand that this tracing is performed only on 15 days of history. It’s just a 15-day history of people tested positive or confirmed at risk and these fifteen days of data will be destroyed after use as defined by law. 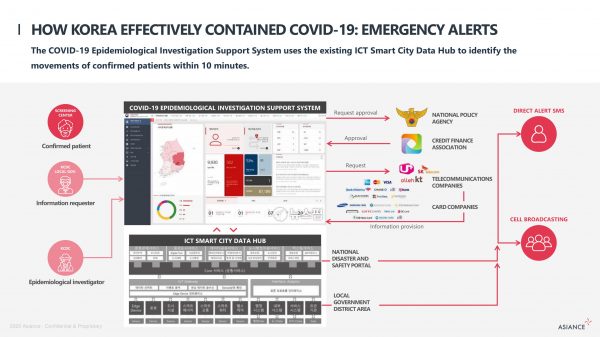 Regarding the cellular broadcast which is widely used in Korea, usually to warn of spikes pollution or natural hazards especially during the monsoon of July.
It allows an emergency message to be sent to a large number of users. This system does not need to know the phone number of the receiver.

For example, it is already de facto GDPR compatible since May 2018 in the European Union.

To prevent the coronavirus pandemic spread, we receive an average of two to ten messages per day to warn us of positive cases in our area.
A link often comes with messages where we can visualize the places where the person went. It allows us to quickly see if we met that person and if we are potentially infected. 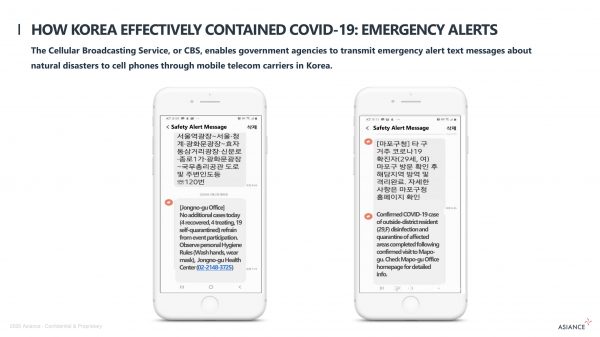 The communicated data are as follows: we have the patient number, his age, his sex, his detailed journey, the date, the time of passage in an area, and if the person was wearing a mask and his nationality.

If someone is infected, the Korean government has implemented an app that allows the person to go into auto quarantine. This app is also compulsory for anyone coming from abroad since April 1st. 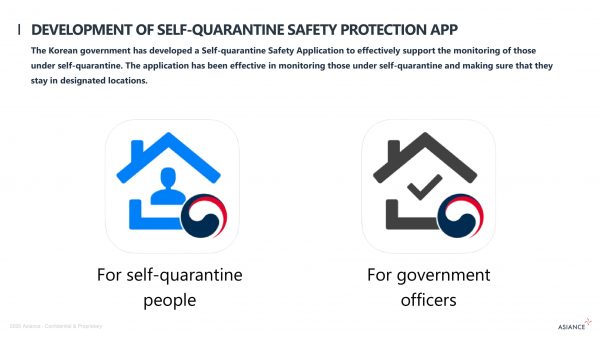 An introduction to the two applications that were developed and launched in record time: one is intended for the public the other is intended for officials responsible for case monitoring.

They were developed swiftly with a launch on March 7 on Android and March 14 on iOS. 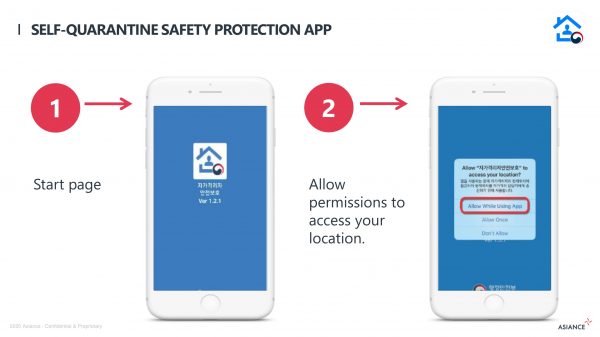 During the installation, the government will inquire you for authorization to collect data to know your location. This is a function that you often see elsewhere when you install some apps on your phone. 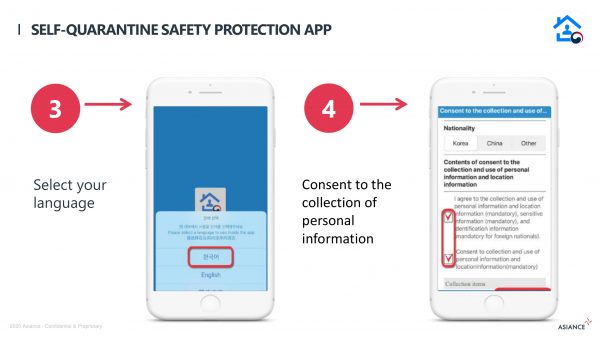 You have to select the language and give your consent on sharing the data that we will list later. 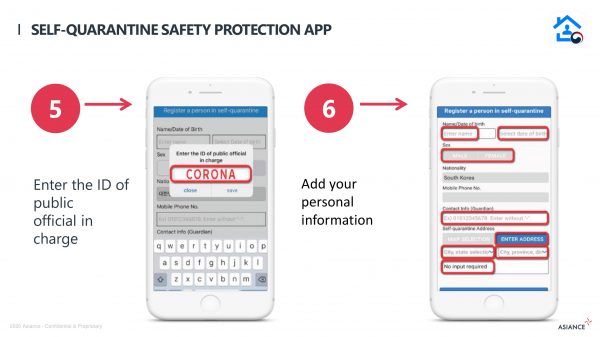 You are then going to have to first enter the “CORONA” identifier which will identify you with the officer in charge of your file and complete your personal information: your gender, name, nationality, phone number, your containment address before proceeding to the self-diagnosis page. 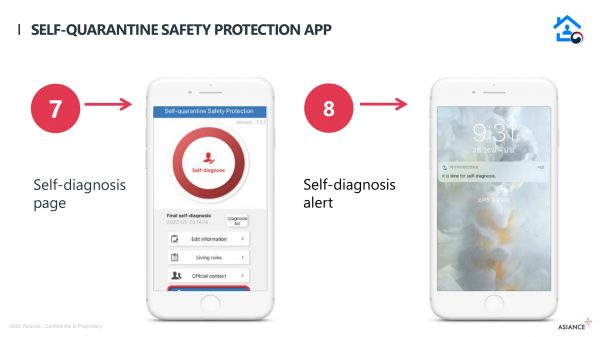 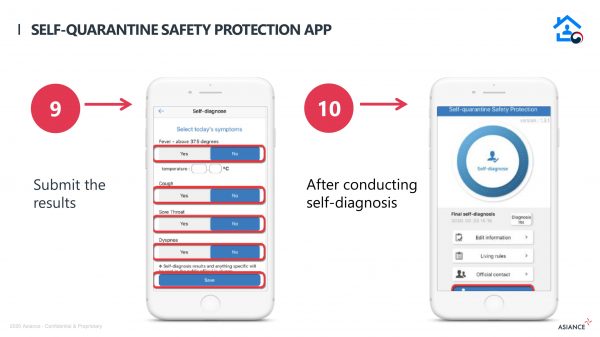 An alert message to remind you twice a day that you must complete the tracking form. You will have to enter the data related to your health status: if you have a fever with a temperature measurement if you cough if you have a sore throat or if you have respiratory problems. 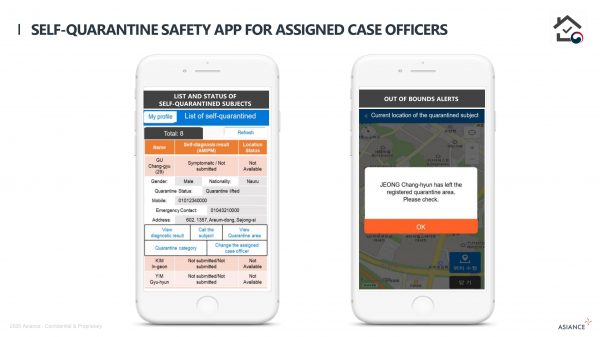 This app is for officials where they can monitor simply by receiving alert messages if the person has completed the daily survey and especially if the person remains well confined to his address. 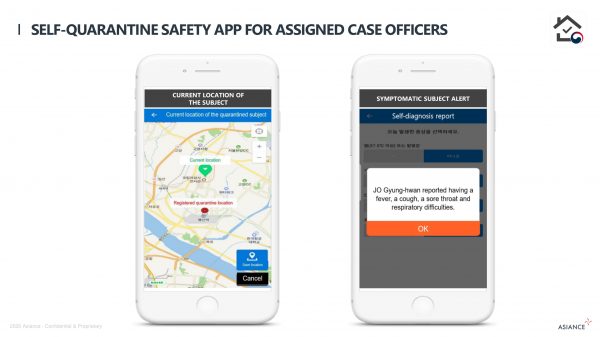 If the person reports health problems, in this case, a message will warn automatically the officer who can call the person directly to validate the information and inform him about the place to carry out a test close to his home.

In the case of deconfinement (non-compliance with the lockdown rule), the Korean government is very severe with people not following this process: the person can receive a fine of up to 7,500 euros and above all a one-year prison sentence.

Today there have been around 40,000 people using this application so in auto quarantine in the country.

You probably think that it’s easy to bypass the system by leaving your smartphone at home, but the government implemented two weeks ago an electronic bracelet for people not respecting this quarantine. 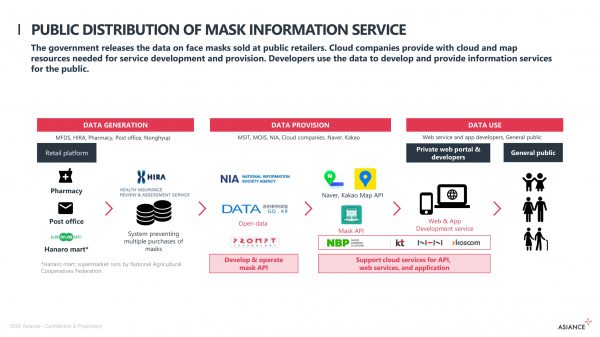 South Korea also provided all the data linked to the inventory of masks available in the country to avoid long waiting lines seen in the first days of a pandemic.
These open APIs have helped developers launch applications that notify civilians of inventory status in real-time. 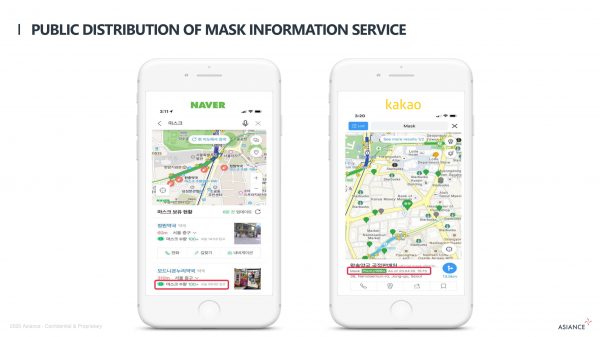 As of March 11th, a dozen portals had launched their free service, mainly Naver and Kakao which cover 99% of the Korean population.

We can, therefore, say that overnight without having to download a specific application, the Korean population was directly informed of the stock situation available in each pharmacy and store offering masks.

Also, to ensure proper distribution and avoid a shortage, 2 masks per week can be purchased in pharmacies based on the last digit of your year of birth, for example, if my year ends with a 1, I can go every Monday to buy my mask or if my year of birth ends with a 5 you have to wait until Friday.

Later on, the limit has been extended to 3 masks and the current rate is around 1.10 euros per mask.

At the end of March, there were many different applications and websites providing information on sales of face masks.

The number of data requests related to the distribution of masks reached 570 million between March 11th and 31st (which corresponds to 9.64 million requests per hour knowing that the number of inhabitants still being 51 million the figure is considerable).

Finally, we have also seen individual initiatives that have played a significant role in proposing quick solutions to counter the spread of the virus. 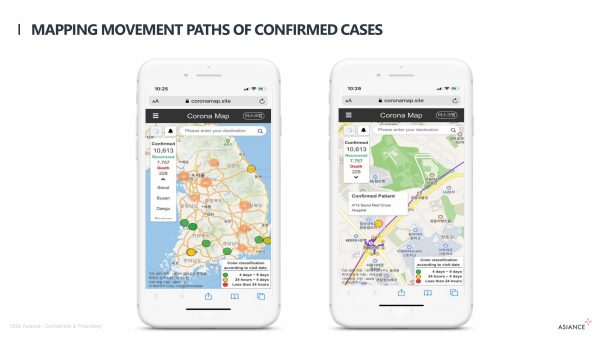 Lee Dong-hoon, a Korean student from Kyung Hee University, for example, made an interactive map available to the public on January 30th with the latest government emergency notifications to prevent positive cases on https://coronamap.site. One week later it had already recorded more than 8 million visitors. All this data is also made available by the KCDC.

Watch the replay of the webinar:
https://youtu.be/BB9LvOLiIn8?t=1806