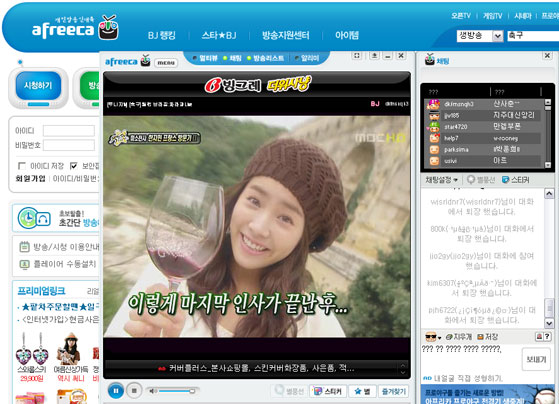 Created in May 2006, Afreeca has rapidly become one of the most popular free Internet TV broadcasting services on the peninsula.  On Afreeca, not only can you find live streaming of all major Korean TV channels, but you can also create and broadcast your own TV channel.

The question: Is this service easily accessible for an expat living in Korea?

As many non-Korean Internet users before may have done, I tried to google ‘Afreeca’ to find the right URL. The site comes up at first, but with a nice warning message: “This site may harm your computer”.  I decided to risk it and follow the link, but Firefox refused to open the site, claiming that the website appeared to contain “harmful software”.  ‘When in Rome, do as the Romans do,’ I thought and realized that I needed to forget Firefox, Chrome, macOS, etc. and just use MS Windows and Internet Explorer instead, like almost 99% of Koreans.

I finally reached the main page: a nice layout and easy use with a basic knowledge of the local language.  The search field also gives you the choice between VOD and live streaming.  However, you need a Korean Social Security Number to register!  That means you can watch the live broadcasts, but you will not be able to create your own TV streams unless you are a Korean national.

Finally, when choosing a channel, you will have to install the NowCom Player through an ActiveX.  This process might require you to lower your security levels and open your firewall ports…But, if you go through all these sacrifices, you will eventually be rewarded with one of the most advanced P2P TV technologies and an amazing video quality.