KakaoTalk is the most popular social networking app in South Korea.
This mobile app gives users the possibility to send messages, make free WIFI phone calls, play games, share photos, and videos and follow their favorite bands and artists. Daily over 2.3 billion messages are being sent and over 90% of Korean smartphone users use KakaoTalk. KakaoTalk is spreading its wings and is on its way to becoming a serious competitor for other social giants like Facebook, Twitter, Path, and WhatsApp.

KakaoTalk was launched in 2010 by Korean entrepreneur BeongSooKim. The services Kakao is offering are far from innovative but the app still managed to pass Facebook is becoming the most used mobile app of South Korea. There are multiple reasons for this success, from offering local content (eg. Kpop stars), Kakao’s strong focus on Android (90% of Koreans own an Android mobile phone) and because KakaoTalk is a truly mobile app. Chatting through KakaoTalk is free of charge and easy. Smartphone users in South Korea are therefore using KakaoTalk to send messages more and more and are making less use of (paid) SMS messages. A potential disaster for telecommunication companies who see their profits shrink fast. Several telcos have sued Kakao over this but so far without results.

KakaoTalk has a smart business model that consists of several ways of monetizing. Downloading and usage of the app is free of charge. Unlike WhatsApp, users do not have to pay for the use of basic services. KakaoTalk makes a profit by letting brands pay for using the app as an online marketing tool and by selling digital goods to users. 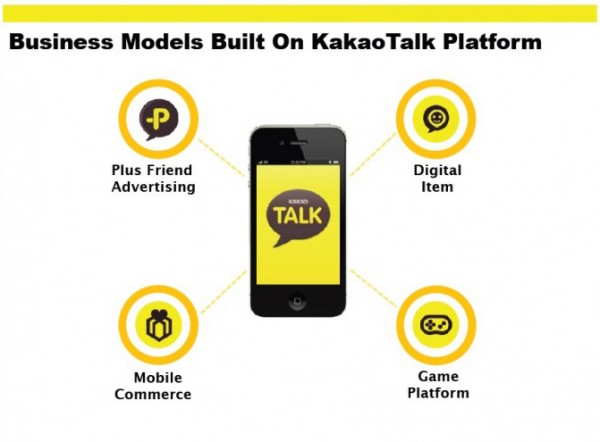 Kakao’s ‘plus friend’ functionality gives brands the possibility to communicate with their followers. Brands can send messages and offer coupon deals. Similar to Facebook, except that for every message send the brand has to pay KakaoTalk a fee. An example of a brand that uses the app for its marketing purposes is fashion retailer Uniqlo. It puts up posters in shops that ask customers to add Uniqlo as a ‘plus friend’, the customer will then be entitled to a discount and will receive regular updates from the brand. 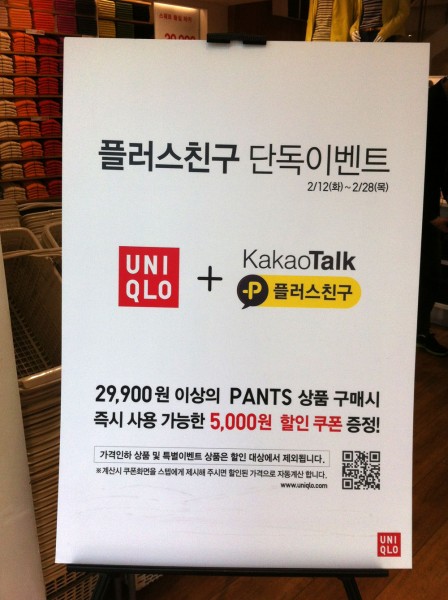 KakaoTalk also sells digital items like emoticons that users can add to their messages. Brands and artists can cooperate with Kakao to create their own set of emoticons and sell them to their fans. Profits will be shared between the brand and Kakao. Examples of this are emoticons of Kpop sensation Girls’ Generation and of course, Psy has his own exclusive emoticons.

Another source of income is mobile commerce. Users can give online goods as gifts to friends through the app and brands can sell digital items. And last but not least Kakao makes a good deal of money through its integrated game platform. KakaoTalk users can download games and play against friends within the app’s environment. High scores can be shared and compared with friends. Anipang is the most popular game and is played by 10 million Koreans (20% of the total population!). It is a highly addictive game with a total daily average playing time of 54 minutes per user. To play you will need credits, these can be purchased from Kakao or you can request your Kakao friends to give them to you. 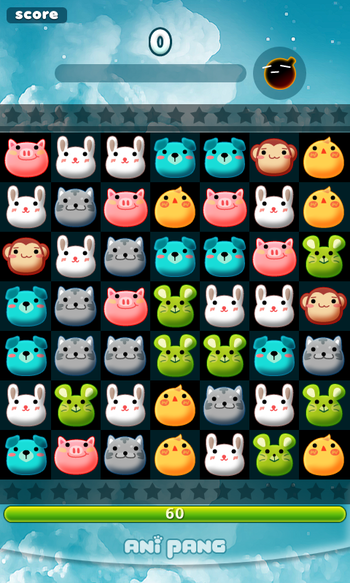 In 2012 Kakao released KakaoStory. This app is basically a mix of Instagram, Facebook, and Path. Within three months after its launch, KakaoStory passed Facebook as Korea’s most used mobile social network. With the app, users can share messages, photos, and videos through a mobile mini-blog. KakaoStory is not unique and shows resemblance with other social networking apps, but its strong focus on mobile and tie in with KakaoTalk made this app very popular among Korean smartphone users. 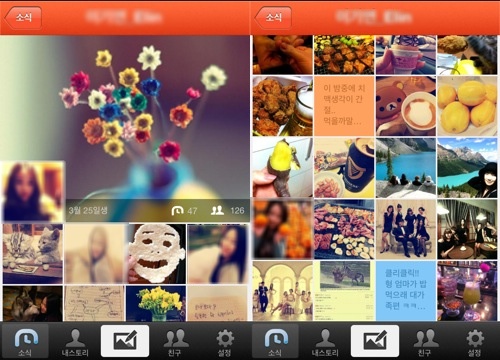 Since September 2012 Kakao is profitable and the company is now trying to expand outside of Korea. The company is partnering with local players in Indonesia and Japan in its quest to conquer other parts of Asia. It also looking to partner with a major player in the USA like Google or Facebook. The app is now available in 12 languages and Kakao is planning to release a pc version in 2013. Recently Kakao announced that it will add more functionality soon. The first example being freshly launched KakaoPage, an online platform for sharing digital content like music, video, and ebooks. Artists, writers and other creative people can use this platform to sell digital content. Again, this has been done before, but with Kakao’s devoted users this might become another big hit for the company. In a short amount of time Kakao has become one of Korea’s biggest social players and serious competition for Facebook and Twitter. The future will show if they manage to achieve the same in other parts of Asia and Europe.